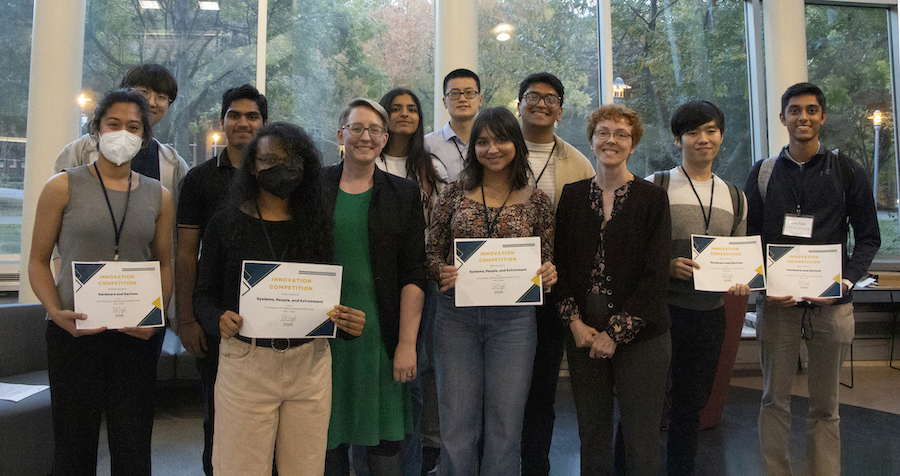 During a short award ceremony at the end of the Innovation Showcase on October 27th, VIP Assistant Director Leah Misemer announced the first and second place winners of the three tracks included in the 4th Annual Georgia Tech Innovation Competition.  This annual competition provides an opportunity for the 1600+ students on the 82 VIP teams to have their work recognized by innovators in industry.

In the Hardware and Devices track, students developing a drop tower to simulate the microgravity of space won first place, while a team creating a wearable patch that sends signals to an Android app won second place.  A team of students building an IoT enabled bee hotel won first place in the Systems, People, and Environment category.  First place in the Software and Applications category went to a team of students demonstrating the safety system they developed for monitoring a bandsaw in makerspaces, while second place went to a team of students working to transform electronic health records to make them more user friendly. Winning teams received $1000 (for first place) and $600 (for second place) to support future team and product development.

All of the winning teams presented posters or demonstrations at the inaugural Innovation Showcase alongside students from a wide range of VIP teams and subteams presenting about their completed work and work in progress.  Other projects on display included a team focused on addressing access issues for people with disabilities in classes at Georgia Tech and a team developing equity-focused recommendations for those evaluating sustainability.  In addition to the posters and demos of VIP teams, the event, held in the atrium of the Ford Earth Science and Technology building, featured two VIP Ambassadors, Nicholas Meyer and Sarah Burchfield, providing additional information about the VIP program.

Teams participating in the Innovation Showcase could elect to compete in the Innovation Competition.  Those teams were divided into tracks based on subject area and evaluated by industry judges with expertise those areas using a rubric based in the Heilmeier questions, a set of questions developed by former DARPA director George Heilmeier that he argued any presentation about research or product development should answer.  The three tracks this year were Hardware and Devices; Software and Applications; and Systems, People, and Environment.  Judges circulated to posters and asked teams questions and then, after a brief deliberation period, winners for each track were announced.

First place winners in each track will advance to the second round of the GT Innovation Competition.  In the spring semester, these teams will screen six minute videos about their projects and answer questions for a panel of industry judges.  The overall winner of the second round will advance to represent Georgia Tech at the VIP Consortium International Innovation Competition, which will feature teams from VIP sites at other schools around the world.